Things have changed a lot here in London over the last few weeks as I’m sure it has around the world. Before they did though I did spend a few days out and about. One sunny day I spent in a local park, taking in the blossoming trees and interacting with the wildlife, just as Spring was beginning to spring.

The sky was bright blue and the clouds were light and fluffy creating great reflections on the lake.

As I walked through the park I spotted lots of flowers already blooming or that had been planted to bring in some colour. 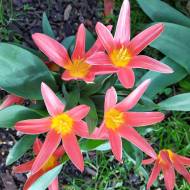 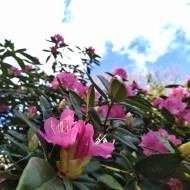 There was a smaller garden that I passed by which has a carved owl statue and some pretty gates. Nearby was a small stream where ducks and geese were soaking up the sunshine. 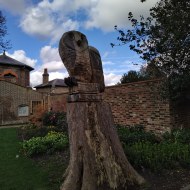 Further along were some huge vibrant green fields, the product of all the rain we’ve had recently. There were also lots of curious, friendly squirrels that were brave enough to come close enough for food. I eventually gave in and gave this cheeky little one some food I had in my bag, which it took straight out of my hand.

There were other little spots tucked away around the park which had some lovely flowers blooming too.

I enjoyed my walk around the park, always find it calming to be in nature and just to be able to switch off from the world for a while.

As things develop at a rapid and unsettling pace around the world, I hope you all are staying safe and well and that we all get through these unpredictable times. I pray that our loved ones are safe too and that this pandemic that has struck the world so suddenly disappears as quickly as it came.

My sister and I recently went to a candy making class, something that we both have wanted to do. We arrived for the class and excitedly looked around the shop at the wonderful sweets as we waited for the candy to be heated to the correct temperature. Once this was done we made our way to the workshop with our instructor. It was only a small class with another woman, my sister and me and the instructor who was going to lead the class. Today we were making rainbow lollipops.

The mixture of glucose, water and sugar was really hot, and so it was only safe for the instructor to use. The instructor poured the mixture onto a specially made table that was heated to enable him to keep working with it. The flavour of the mixture was tutti frutti and it smelled great. Once the mixture was on the table our instructor started to add colour, made with natural flavourings and were vegan, vegetarian and halal which was great to know. 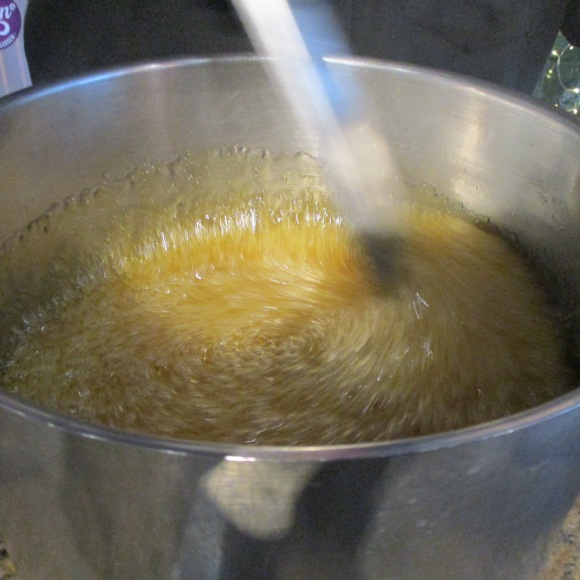 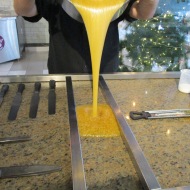 First the primary colours were made, and then our instructor used these to make the secondary colours. The white was stretched to add air which would then bring out the colour. All the colours were then laid out in rainbow order and wrapped around the white candy to create a long, colourful tube. We were now able to start making our rainbow lollipops. 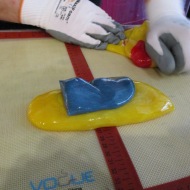 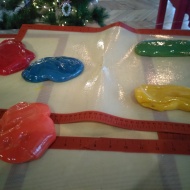 Our instructor stretched the candy tube to make it thinner and then gave us a piece each to create our shapes. Working on heated tables and with gloves on we made a simple shape first, the swirl, and adding a wooden stick our lollipop was complete. We then made a few more shapes; starts, hearts, flowers and butterflies. I think my favourite was the duck which came out quite well. We had to work quickly with each piece of candy as it would become difficult to mold as it cooled, hardened and turned glass-like. 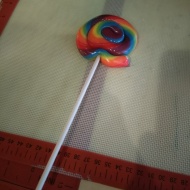 The class was about 1 hour long, but the time went quickly, as it always does when you’re having fun. Our instructor was friendly, and very knowledgeable, and the candy making process was almost scientific when it came to understanding the way the ingredients interacted with each other. And the best bit; we all got to take our tasty creations home with us, which was a lot more than I expected. I would definitely recommend doing a class like this, as it’s not every day that you get to have a hands on experience that involves such tasty treats.

Cambridge University is one of the most prestigious and oldest in the world and fortunately for me, it isn’t too far from London so I recently decided to visit for the day. As I’d never been to Cambridge and seeing as it is steeped in so much history I decided to join a tour. Cambridge University, unlike other institutions is made up of lots of individual colleges, and the tour was made up of visiting the main ones.

Most of the college buildings were made of distinctive yellow limestone, and the detail of the embellishment was amazing. I could tell that this was a wealthy university due to just how much detail and grandeur the buildings held. 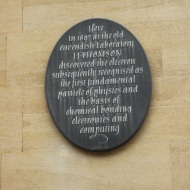 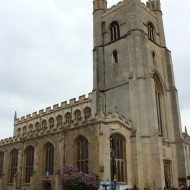 Along the tour it was really interesting hearing the story of the discovery of DNA and about some of the now famous people that studied at the university. We walked past the River Cam and people punting (boating to you and me) which Cambridge is also known for. As I watched, a friendly duck came up to me to make my acquaintance. 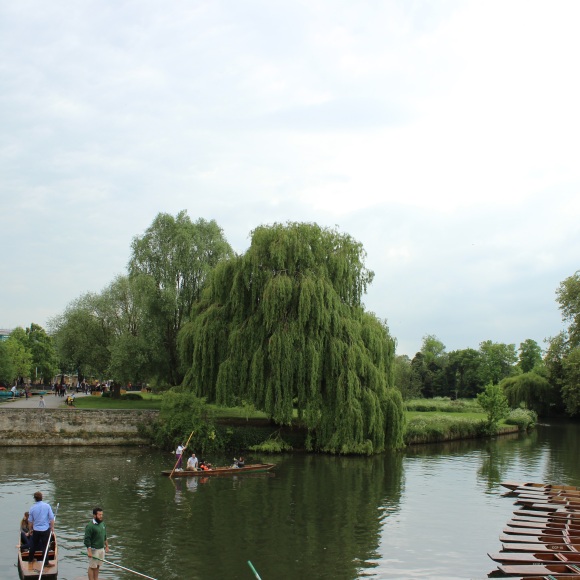 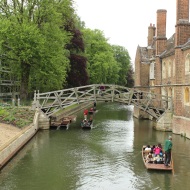 Most of the colleges were off limits to the public as it was exam period for the students but I did manage to poke my head through some doors to admire the courtyards. Among the most famous colleges on the tour was Trinity College which was founded by King Henry VIII which is why it has his statue on the entrance. 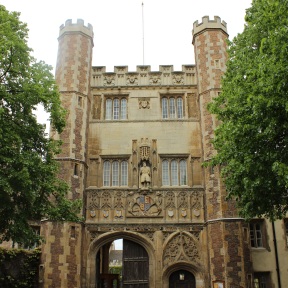 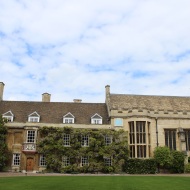 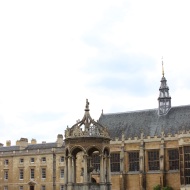 One of the things I was fascinated to see was the tree (supposedly) that Isaac Newton saw an apple fall from and that inspired his theory of gravity (although I think it’s actually a descendent of that tree). I was inspired to be in a place where so many influential, intelligent people studied. 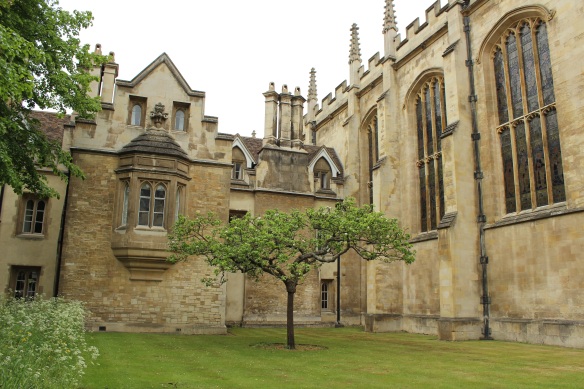 Once the tour was over I was free to do what I wanted so I took more time to look around a couple of the open courtyards and gardens and just re-visited some of the colleges to look at some of the intricate details more closely. On the way back to the station I also popped into Fitzwilliam Museum for a quick look around. 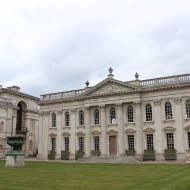 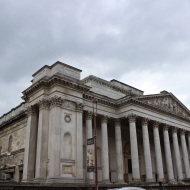 My favourite view of the day was the back of Kings College, with it tall spires reaching high and the enormous grounds that it was sitting on.

I would like to come back one day, to try the punting, take more time to see the museum and botanical gardens and maybe if I was lucky enough to have a look inside the colleges to try and get a sense of what it must be like to study at such a reputable and famous university.

We’ve had some warmer weather recently so I decided to go to one of the local parks for a walk and see if nature is showing any sign of waking up. There were some signs and as well as managing to take some good photographs I got some much welcomed fresh air too. 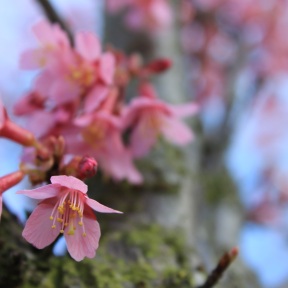 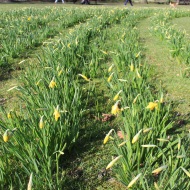 My favourite picture of the day is this one

I love how the water of the lake reflecting overhanging branches and the bright blue sky seems to appear like a waterpainting with soft brushstrokes. The mandrake in comparison is in sharpe focus, creating an almost surreal image.

I plan to come back soon and capture more of changing nature as the days get longer, brighter and warmer. 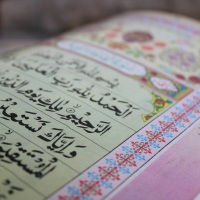 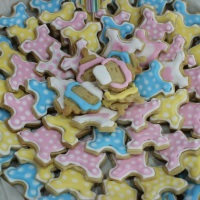 Just because you CAN read Moby Dick doesn't mean you should.