Regent’s Park was host to the Frieze Sculpture event again this year. I’ve enjoyed the artworks displayed in previous years so decided to take a look to see what was on offer this time. The park has been called a museum without walls and it seems like that’s just what it is with artworks surrounded by greenery.

There were some interesting pieces on show; one that caught my eye was a golden cello made of bees. I also liked the giant toy car and I really liked what the Superhero Cog woman represented by strong, stable cogs 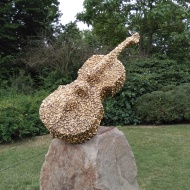 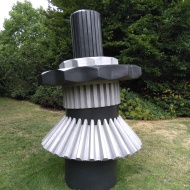 Other pieces that stood out to me included the large Japanese cartoon character, My Melody, and the weather vanes that had inspiring words on them. I also thought that the Laura Asia’s Dream sculpture of a large face set at an angle was quite skillfully made. 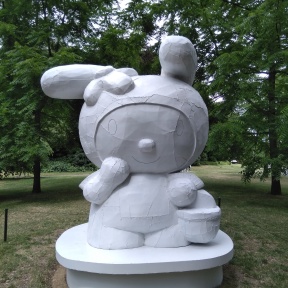 My favourite artwork was a quintessentially English ball that represented a country house. I love how neat it has been tied up into a ball.

I thought the giant blue egg was cool, it was supposed to emit sounds that a baby bird in an egg would make but I couldn’t hear anything myself.

Other sculptures made you think, like the bridges which you could also walk over, words about climate change carved in them. 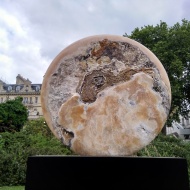 Another piece that I thought was quite immersive and one of the highlights was One through Zero, which consisted of giant bronze numbers in a circle, like a clock.

I thought some of the sculptures in this year’s Frieze were fun, interesting and quite unique, and I enjoyed looking at and contemplating what they stood for. I look forward to seeing what next year brings.