The Lumiere event that my sister and I went along to recently was spaced out over various areas across London. Part 1 covered the innovative light artworks in Mayfair and Regent Street, and this post will cover the remaining areas.

After our walk through Regents Street we headed towards Trafalgar Square. I love Trafalgar Square anyway so with this light festival I was looking forward to see what was on show. In front of the National Gallery the words ‘Central Point’ were illuminated (these are normally found on top of a building on Oxford Street) and the iconic fountains were filled with light and plastic bottles. My favourite in this area were the neon dogs, which were so colourful and fun.

After seeing the dogs we hurried on to the next area on the map, Leicester Square. On approaching we could see an array of wonderful bright colours and could see that the whole area had been transformed into a garden of light. There were enormous lit flowers and colourful trees and I think this was my sister and my favourite spot on the map. My photos don’t show just how much the colours popped but it was a a really pretty sight. 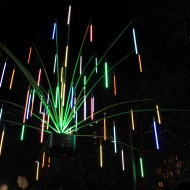 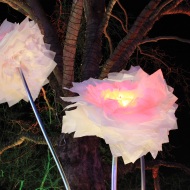 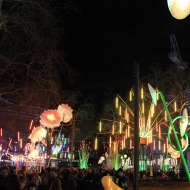 Our last stop on the map was at Kings Cross, here the installations were a bit easier to find and closer together. There were some really innovative ideas; some light sticks to draw on the ground, a fun light show projected onto a large building and rainbow tunnel made up of coloured bottles. A little extra thing we spotted were candy floss on light sticks, which we thought was such a simple but effective idea. 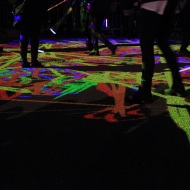 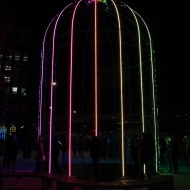 All in all my sister and I had a great but exhausting evening, we walked around London on a cold night for approximately 4 hours and manged to see all but a handful of what was on show. We thought it was a great event and one that certainly lived up to the promise of showing us the city in a new light. I think we both agree that we would definitely go along to this event again if it was held next Winter. For more photos you can check out my sisters post of the evening here.